This is The Gatekeepers, in which Eater roams the city meeting the fine ladies and gentlemen that stand between you and some of the city's hottest tables. 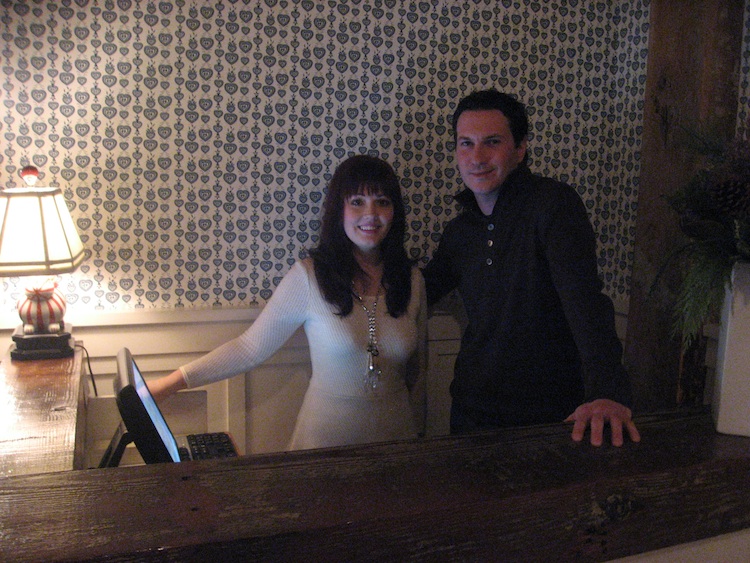 Since opening in August 2011, The Bachelor Farmer has been one of Minneapolis's hottest—and most booked—restaurants, known for Paul Berglund's "new Nordic" cuisine. Owned by brothers Eric and Andrew Dayton (who also happen to be the sons of Minnesota Governor Mark Dayton), the restaurant forms part of a triad of hipness in the North Loop along with cocktail bar Marvel Bar and retail shop Askov Finlayson. Before coming to the Bachelor Farmer, Managing Director Nathan Rostance spent time at JP American Bistro, Broders' Pasta Bar (where his father, Michael Rostance, has been a chef for more than 20 years), Oceanaire, and Cru, where he met General Manager Erin Rolek. Rostance and Rolek have both been with the Bachelor Farmer from day one, originally as general manager and assistant GM, respectively. Eater recently chatted with Rostance and Rolek about what it's like to get a table on a busy night, defying Minnesotan stereotypes, and Mark Dayton's chances of walking in without a reservation.

How far in advance does someone have to make a reservation now for a Saturday night?
Nathan Rostance, Managing Director: It's interesting, the longer I work in this business, the harder that question is to answer because every Saturday is so different than the last. We often tell people, try to book out at least two weeks, however, things change, and people cancel. We keep an eye on the reservations daily, and if we see things move, we may open a slot here or there, we may move things around, and so it's not unusual for someone to be able to call a couple days before, if they can be flexible about what time they want to come in. Now, if they want to come in at seven o'clock on a Saturday night, that might be tricky, but if they can come in at 5:30 or 9:30, then we can try to make something happen for them, for sure.

What's the most popular reservation time?
Erin Rolek, General Manager: I would say 6:30 – 7:30. Nathan: But we've been pushing it. We've been pretty lucky to have people eat later here than expected. In the summertime here, for sure, because it stays light so late, but even in the winter, we're pretty busy right up until the end. We don't stay open that late, we're open until 9:30 during the week and 10:30 on the weekends, at least we're seating until then. But we'll have people in the dining room often until 11:30 or midnight.

So, it's just before opening on a Saturday night, and there's a line of walk-ins outside. How do you describe the scene when the restaurant door opens at 5:30?
Erin: We always save a few tables for walk-ins, and we try to save a good amount of tables for walk-ins, so we can be available to our neighbors and people who just want to stop in. It's a little broader during the week and a little narrower Friday and Saturday, but we do save tables. So, I think, our hosts have taken it as a challenge—that first 15 minutes—to really just make everyone as happy as they can. And it's been a learning process, but that time is the pivotal moment when you walk in and try to send people where they need to be. And hopefully we get to everyone in that line, but, of course, sometimes we can't.

Do you think that situation—the line of walk-ins waiting at the door—is a little unusual in the Minneapolis dining scene?
Nathan: I think it's a little bit unusual. But I come from Broders', and they don't take reservations, so it was not unusual to open the doors and have the entire restaurant standing outside in line. What's nice about here is that we do have the overflow capabilities with our restaurant bar. What's also nice about here is that this neighborhood has grown so diverse and more and more restaurants are opening here that if, for some reason, we can't get you in as fast as you want to, we can make some phone calls and we can call Haute Dish, we can call la Grassa, we can call Toast, and there's definitely going to be a great place for you to have dinner somewhere in this neighborhood.

So you guys would do that, you would call another restaurant.
Nathan: Absolutely.

Is there anything I can do to make my wait shorter?
Erin: I always recommend that if you want to come at a peak time on a Friday or Saturday to come about an hour before you're expecting to eat, and the wait may be longer, it may be less, but that's a good median time. Nathan: We can make it feel shorter. Erin: Right. Cutting down on actual minutes, no.

Has anyone ever tried to bribe either of you or any of the hosts?
Erin: Oh, yeah.

What kind of bribes?
Erin: Monetary bribes. The hosts don't accept them.

How did things change after the New York Times article came out at the end of the summer?
Erin: Clientele. Not business, but clientele, a little bit. I would say that we saw a lot more people from the East Coast. We saw a lot of people coming in from DC, a lot of people coming in from New York, business travelers or whoever would be in town. That's the biggest thing that changed. Nathan: I agree with that. We've been pretty lucky—we're a small restaurant, maybe 80 seats in the dining room—and so, we've been busy from the beginning. So it's really hard for an article to bump how much business we do. But those things certainly raise awareness, and we get more calls, and then we get those really cool tables of somebody who read about us on the airplane. Somebody at the Washington Post did an article on us, and the next day, somebody had read about us on the airplane and came to see us. That, to me, is really cool. It's really neat to have people come into the Bachelor Farmer not because they heard about us locally, but because they heard about us nationally. It's an honor.

What's your favorite thing to eat here?
Erin: The menu can change almost daily, so it's hard to say because it changes so much. But for me, one of the sections on our menu is the toast section, and that's my favorite. We make fresh bread – Paul's a really amazing breadmaker, and he makes two different kinds of bread every day for the toast section. I think it's really fun, it's a nod to the Danish open faces, smørrebrød kind of thing. I'm never going to have a meal here and skip a toast. Nathan: For me, that's the whole point of our menu, is that it does change a little bit every day. So for me, it's always about what's new, what's next. I always want to have whatever's new and whatever's coming up. Sunday's are a great time to come in, we do one prix fixe dinner for everybody. So I like to show up on Sundays—I don't work on Sundays—and not even know what that menu is and just have dinner. To me that's the most fun part of this restaurant, is just having something different every single time you come. That being said, however, pork chops on Monday are incredible. Erin: That's true, that's true. Chop night. Nathan: We bring in two whole hogs every week and butcher them ourselves and on Mondays—only on Mondays—we sell the pork chops. And they're massive. And incredibly delicious. It's the best pork chop I've ever had.

Where are you guys eating when you're not eating here?
Nathan: I go to Tilia quite a lot. La Belle Vie, one of the great restaurants in town. In this neighborhood, Haute Dish, Bar la Grassa, 112 Eatery is one of my favorite places in town. I love to cook, I love to have my dad cook for me, too, so whenever I can, I eat with him. We do Broders' as much as possible. But there's so many new places opening up, it's hard to keep up. Erin: I would agree with Nathan, all those restaurants I like to frequent. I really love Broders'. I love Broders'. I think it's delicious. And I love Saffron, and World Street Kitchen—I haven't been there yet, but I'm dying to go. I love the chef, I love the brother pair—Sameh and Saed—I think they're great. I think they have a really cool approach to making food.

Does anyone ever get a dish here that wasn't what they were expecting? And how do you handle that?
Erin: Yes, the tartare. Some people still don't realize that tartare is not cooked. We have a lot of challenging dishes—we have pig hearts and duck hearts, and we do gizzards. Our servers are incredible, our kitchen is incredible, so I think a lot of our servers are really excited about selling items like this, but they'll never force it on anyone. I think they'll challenge guests a little, and be like, hey, this is amazing, let me send it to you, but if the guest doesn't like it or isn't excited about it, then we'll just take it away and give you something else. Nathan: We're just happy if you try it. That's kind of the surprising thing about this restaurant, is how adventurous people have been. When we first started putting hearts and livers and gizzards on the menu, I didn't think that anyone would go for it. Erin: Neither did Paul, and he's been astounded. Nathan: And it's been great. People have been really, really adventurous, despite the Minnesota stereotype. It's not true, I'm here to tell you. People are really adventurous here.