Share All sharing options for: Friends of Eater Name Top Restaurant Newcomers of 2012

As is the tradition at Eater, our closeout of the year is a survey of friends, industry types, and bloggers. We've already covered Best Standbys of the year. Now, Top Newcomers. Readers, please add your thoughts to the comments. 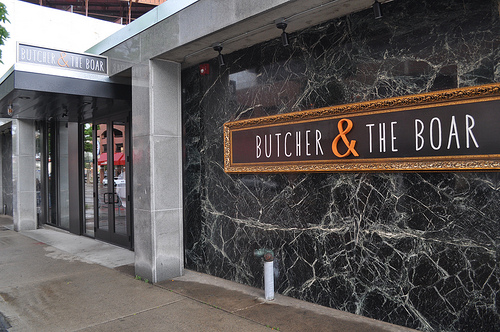 [Photo: Butcher & the Boar, one of the favorite newcomers, Lazy Lightning]

Q: What are the top restaurant newcomers of 2012?

Emily Weiss, writer, City Pages: Butcher and the Boar for all around experience, Icehouse for drinks and atmosphere, and the very recent addition of World Street Kitchen for consistent bold flavors and convenience.

Jay Gabler, writer/editor, The Tangential, writer/editor, TC Daily Planet: The service is incredibly enthusiastic, and the food and beer are good, at New Bohemia in Northeast. The new Foxy Falafel space is nice, but it's no truck. Other than that, I think the only actually new restaurant I went to in 2012 was the Buffalo Wild Wings in Roseville. It was deeply satisfying, though I've decided it's time to switch to bone-in wings. When I was a child*, I ate children's wings. Now I am a man, and I should eat man's wings. (* Ages 0-36)

Joy Summers, food editor, Lavender Magazine; columnist, City Pages: Funny you should ask, I wrote about that earlier this month for Lavender.

Claire Stanford, editor, Eater MPLS: Icehouse, for its sipping shots, especially the For His Majesty. I like that you don't have to commit your whole night to one cocktail. Also, you wouldn't necessarily expect it, but they have shockingly good pie.