Nine Food Trucks That Are Braving the Winter

Share All sharing options for: Nine Food Trucks That Are Braving the Winter 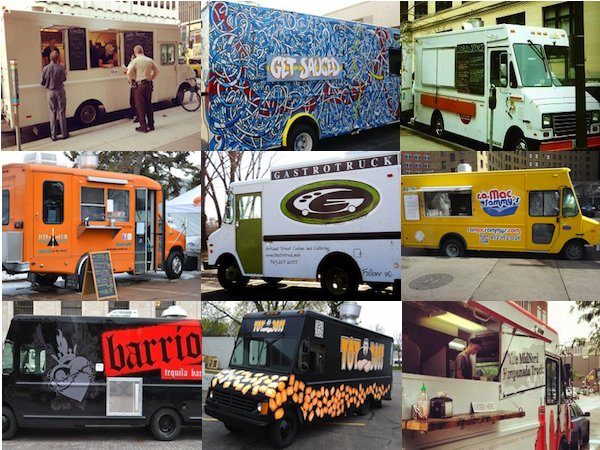 Temperatures may be dropping, but a few hearty food trucks are still out on the streets (and taprooms) dishing up your favorite mobile cuisine. Here in the frozen tundra, most food trucks pack it in for the winter. These brave souls are still bringing it to the street with stick-to-your-ribs dishes like a meatloaf sandwich with tomato bacon jam and chicken curry mac n'cheese.

Still can't bring yourself to make an icy lunch stroll? Lots of the trucks are parked at taprooms during evenings and weekends, so you can make a quick dash out of heated comfort and be back to your IPA before your toes are even vaguely frostbitten. Be sure to check out the truck's Twitter accounts (included here) for the latest updates on their menus and locations.

Did we miss a food truck that is braving the winter? Let us know in the comments.

3) Simply Steve's: If you're looking for a killer burger, look no further. Simply Steve's serves up black bean quinoa burgers and Cajun turkey burgers, as well as non-burger items like the Cubano burrito. The truck is usually parked on Marquette Ave., between 7th and 8th St., during lunch; it also makes frequent appearances at the Indeed taproom and the Fulton taproom. @Simplysteves
[Photo: Yelp]

4) Fork in the Road: The seriously extensive menu includes dishes like molten meatball sliders and shrimp and orzo pasta, as well as soups like loaded baked potato and Guinness chili, for those really cold days. They're still doing some catering, and are also making occasional appearances at the Fulton taproom. @forkNroadtruck
[Photo: Fork in the Road Facebook Page]

5) Gastrotruck: If these short, dark days are getting you down, Gastrotruck's meatloaf sandwich with tomato bacon jam or braised lamb tacos with sauteed greens should perk you up. Usually parked outside the Capitol at lunchtime, Gastrotruck also makes frequent appearances at the Indeed, Fulton, and Summit taprooms. @gastrotruck
[Photo: Yelp]

6) R.A. MacSammy's: Is there a more comforting food than mac n'cheese? R.A. MacSammy's takes on the classic—like hot bacon-spinach mac or chicken curry mac—will stick to your ribs and get you through the long, cold winter. They make the St. Paul rounds at lunchtime, with locations including the Capitol, Mears Park, Ecolab, Rice Park, and more; they also make occasional appearances at the Summit and Flat Earth taprooms. @RAMacsammys
[Photo: Yelp]

7) Barrio Truck: Sure, you can go to the brick n'mortar Barrio anytime, but the truck is so much more fun. It's still out and about, serving up dishes like mahi-mahi tacos and chicken al pastor burritos. It can mostly be found at the Fulton taproom, but also sometimes makes appearances at the Indeed and Summit taprooms. @Barrio_Truck
[Photo: Roaming Hunger]

8) Tot Boss: If there is one food that is as comforting as mac n'cheese, it's got to be tater tots. Tot Boss has 'em in all forms: bacon-wrapped tater tots, tater tot nachos, and tater tot hot dish, for just a few. The truck will be at the St. Paul Winter Carnival on January 26 and February 4. @TOTBOSStruck
[Photo: Mobile Cuisine]

9) MidNord Empanada Truck: With empanadas ranging from the Juicy Lucy (ground beef and cheese) to the Buffalo Soldiers (grilled chicken, Buffalo sauce, blue cheese) to the Ménage à Trois (dates, bacon, and pecorino romano), MidNord has an empanada for every appetite. They serve lunch occasionally at Kroll Ontrack and also make appearances at the Fulton taproom. @MidNordTrucks
[Photo: Roaming Hunger]