Share All sharing options for: 10 Things to Know About Marvel Bar's New(ish) Menu 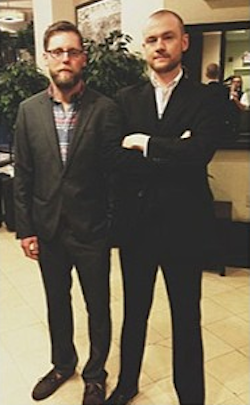 With the launch of their new, expanded menu last month, the North Loop's Marvel Bar keeps upping its cocktail game. And that's not the only change. A few weeks ago, main barman Pip Hanson became beverage director of both Marvel Bar and The Bachelor Farmer, and longtime Marvel bartender Peder Schweigert became Marvel's head bartender.

Hanson and Schweigert spoke with Eater about the new additions to the menu, their shared favorite cocktail, the most popular drink at Marvel (it's not on the menu), and more. Here's a guide to the new menu, along with some food and drink highlights.

1. The Gatsby, a Marvel Bar standby, is both Hanson and Schewigert's favorite drink on the menu. A mixture of salt, apricot, Benedictine, Tomatin 12 yr, and water, it is a diluted drink that's served only slightly chilled. Describing the Gatsby, Hanson says, "As a concept, it's so appealing to me. There's lots of flavor and lots of complexity there, but it doesn't just blow you away, you have to search for it a little." Schweigert says, "I like everything about that drink. It smells like fall and feels like I'm putting on a sweater."

2. Never say never, but it's likely that the Oliveto, the Gatsby, and the Strongwater will never leave the menu. If you're keeping track, new cocktail additions include: Amaro Royale, Double Luxe, Ricky Ticky, Trinidad Seventy Five, Go Big, Marley's Ghost, and After Eight.

3. The Ricky Ticky, a new drink, represents yet another new and novel direction for Marvel: drinks with no added sugar. "I'm really intrigued by cocktails that don't call for sugar at all," Hanson says. "Forbidding sugar or other sweet ingredients forces you to re-learn a lot of rules."

4. An off-the-menu Old Fashioned is the bar's most-ordered cocktail, and that's just fine. "It would be hubris to think that our originals are better than something that has withstood 200 years," Hanson says. The customer picks the whiskey, but Hanson recommends Marvel's Buffalo Trace single barrel.

5. About that whiskey. With more than 170 kinds of whiskey on the menu, looking at the list can be overwhelming. Ergo, whiskey flights (and possibly some other spirit flights coming soon). For the novice whiskey drinker, Schweigert and Hanson recommend either the Heaven Hill Vertical or the Multigrain flight; for the more advanced whiskey drinker, there's the Unusual Peated, Northern Islay Malts, or International Single Malts flights.

6. The food. The new menu quadruples Marvel's food offerings, taking them from one food item (the $1 Cheetos) to four options. The food is designed to pair well with the cocktails, which means not only getting some salt, spice, and vinegar flavors, but also making sure it has some nutritional value to sop up that booze. That means an upgraded G.O.R.P. (which you may recognize as "good ol' raisins and peanuts"), with pumpkin seeds, almonds, cashews, peanuts, dried cranberries, dried cherries, and chunks of Valrhona chocolate, all spiced with a mix of cayenne, paprika, and cinnamon. There's also marinated olives and a pickled egg, prepared ahead in the Bachelor Farmer kitchen with curry powder, ginger, and onions, and topped with a pinch of parsley salt.

7. The punch. Marvel's always served a weekly punch (served by the cup or bowl), but now they've added four bowls of punch, as well, pulling from two years of weekly punch experiments. On the much-discussed $200 bowl of cognac, rum, peach, yellow chartreuse, and sparkling wine, Schweigert says, "Everything about that is happiness." They've also already started serving some hot punches as the weekly punch—including a curried coconut milk brandy punch and an oatmeal water and scotch punch—which will continue, interspersed with cold punches, throughout the winter.

8. House Traditions. The somewhat inscrutable House Traditions section of the menu (ginwater, anyone?) represents a codification of things Marvel had already been doing in house, and that people started asking for. That ginwater? It's 30 ml of gin mixed in 1L of water, for a drink that's about .5 ABV and meant to be drunk alongside your cocktail. The bittered cola (cola with Angostura) is the one caffeinated option on the menu, and it's ideal for ending your night before heading off to your next stop.

9. Non-Intoxicants. Both Hanson and Schweigert expressed surprise at just how well the four new nonalcoholic drinks are selling. With non-intoxicant combos (let's not call them "mocktails", please) like pickle brine/lime/ginger and kombucha/orange flower water/lemon/distilled water, now there's plenty of options for non-drinkers, too.

10. Yes, there is beer. Despite what many thought, Marvel has always had more than just cans of Hamm's. But now, in addition to four rotating local taps and that can of Hamm's, they also five more tall-boys available, if you really must go the non-cocktail route.
· Marvel Bar Official Website
· All Coverage of Marvel Bar [Eater MPLS]
· All Coverage of Cocktail Week 2013 [Eater MPLS]