Share All sharing options for: Phil Barker on 44 Years at Nye's Polonaise Room

Welcome to Lifers, a feature in which Eater interviews the men and women who have worked in the restaurant and bar industry for the better part of their lives, sharing their stories and more. 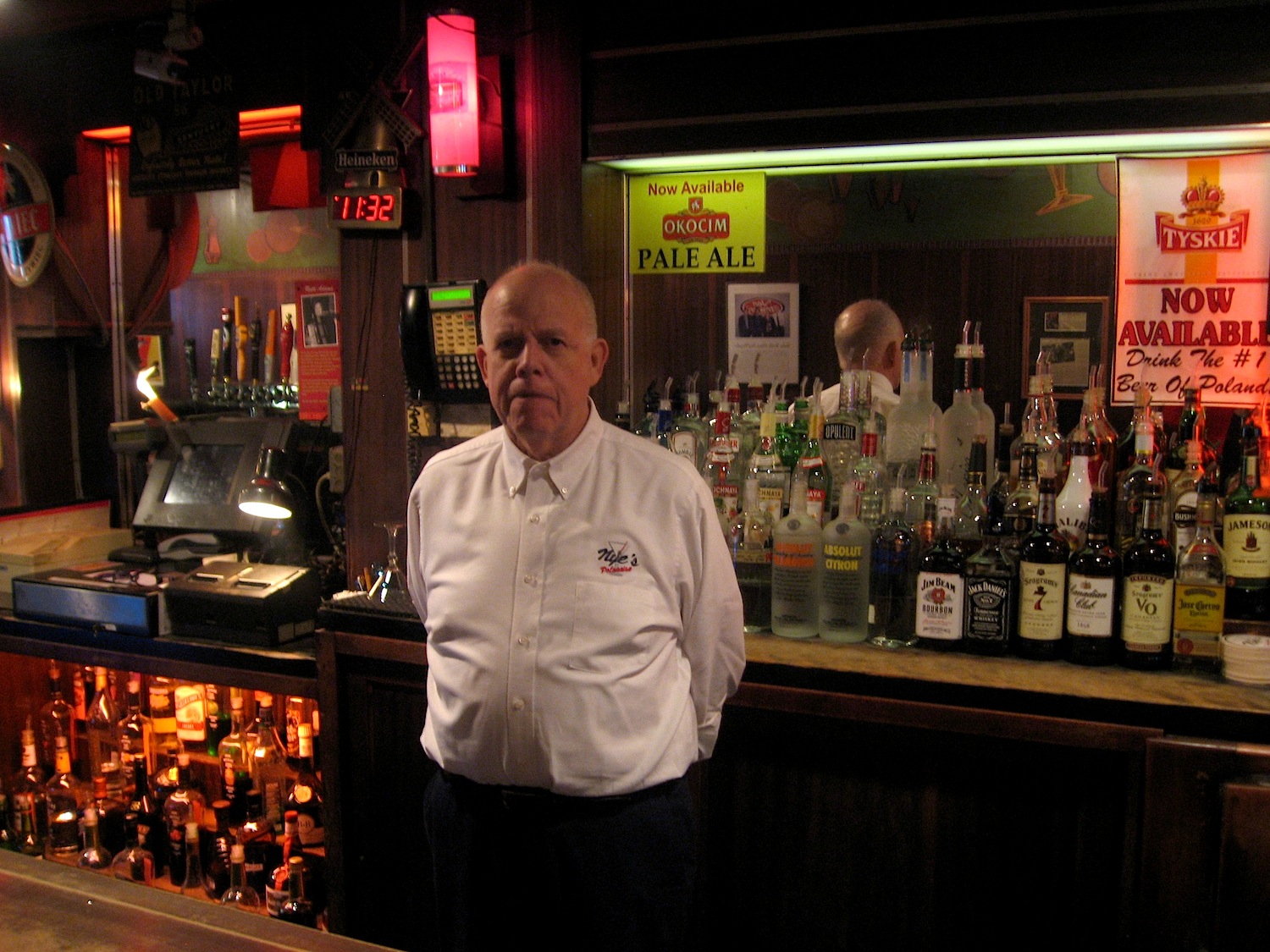 Since starting as a bartender at Northeast landmark Nye's Polonaise Room on February 1, 1969, bartender Phil Barker has become a fixture himself, serving up drinks for almost 45 years. Now semi-retired, Barker only works on Fridays and Saturdays during the day. He took a few minutes to chat with us at 11 a.m. on Friday morning at the very start of his shift. We talked about chichi drinks, pedal pubs, why vodka used to be outlawed in the state of Minnesota, and the one drink that Barker won't make.

How did you start working at Nye's? I had just gotten out of the Navy, and I was sitting at home and Al Nye called me and asked me if I would come down and start tending bar. We used to serve lunches, and he kept paying me, and I thought it beats the heck out of a real job.

How did you know Al Nye? From when I was a small child. He lived across the alley from some cousins of mine over in Northeast.

Did you have any bar-tending experience? None.

How did you learn how to tend bar? Just watched.

When you first started, what kind of drinks were people ordering? How is it different from now? Or is it different? You know, standard cocktails; Manhattans, martinis. There's been a few new liquors introduced since then. With the conception of Captain Morgan rum, we sell a lot of that. Basically drinks are about the same. It's kind of funny. It's kind of coming around on a full swing. Everybody makes chichi types of martinis now, and a lot of them are just old-fashioned cocktails that we used to make here years ago. Now they've added all these sweet liqueurs to them.

Do you have a most popular cocktail here? It all depends where the person is from. A lot of people like vodka martinis. Dirty ones, with the olive juice in them. And vodka for many years was outlawed in the state of Minnesota until 1957. Most people don't even know that.

Do you know why it was outlawed? They said you couldn't smell it on your breath, which is a lie because it smells like lighter fluid. A friend of mine had some salesmen and he'd tell his salesmen when you go out drinking at noon I don't want you drinking vodka, I want you drinking bourbon Manhattans. Then, when you make your calls in the afternoon people will know you're drunk, not stupid.

So what is your typical day here like? Well I work Friday and Saturday. Just the two day shifts. I'm semi-retired. So I just work Fridays and Saturdays

Do you have a lot of people in here then? I have a few of the regulars stop in. It all depends on the time of year. So many are retired now. During the summertime, on Saturdays, we get pedal pubs in. We're the first bar across the river, so they pull up here, and then they'd all pour in, it would be like 10, 15 people, and they'd all get a shot and then run back out the door.

What kind of a shot do they get? You know, it all depends on what they want. All these little chichi shots.

How do you learn how to make these shots? There's a recipe for it.

Do they ever come up with something and you don't know what it is? Oh sure, I just say, what?

What's a shot recently that didn't know what it was? Oh, what was it...A red-headed slut. I go: what? They told me what was in it and I say, no, I'm not doing that. One group comes in and says we'll have some shots of tequila. I always kid them because they ask for limes and salt, and I say what, training wheels?

When you were working here the most how much were you working? I opened and closed the bar next door from 9 in the morning to 1 at night.

What's your favorite thing about working here? It's not a real job. I have fun. It's just the number of people that come in here. They're people I've been waiting on for years and years.

Do you have any favorite regulars? How many regulars would you say you have? It's hard to say. Some people I don't see that often. They've retired or moved away. A number have passed away over the years.

How do you spend you're time off now that you're semi-retired? With my grandchildren. Running there and doing this, doing that. I have two of them that are playing hockey, so going to watch their hockey practice, or I have one that's swimming. Two of my daughters are swim coaches and my one son is a hockey coach. So, hauling kids there. My one daughter does respite care for an adult, so I pick him up at his house.

So you're doing a lot of chauffeuring? Yeah, and whatever my wife tells me to do.