Share All sharing options for: Tilia's Tai Rosa Maldonado on 2 1/2 Hour Waits and the One Way to Get a Reservation

This is the Gatekeepers, in which Eater meets the fine ladies and gentlemen that stand between you and some of your favorite hard-to-get tables. 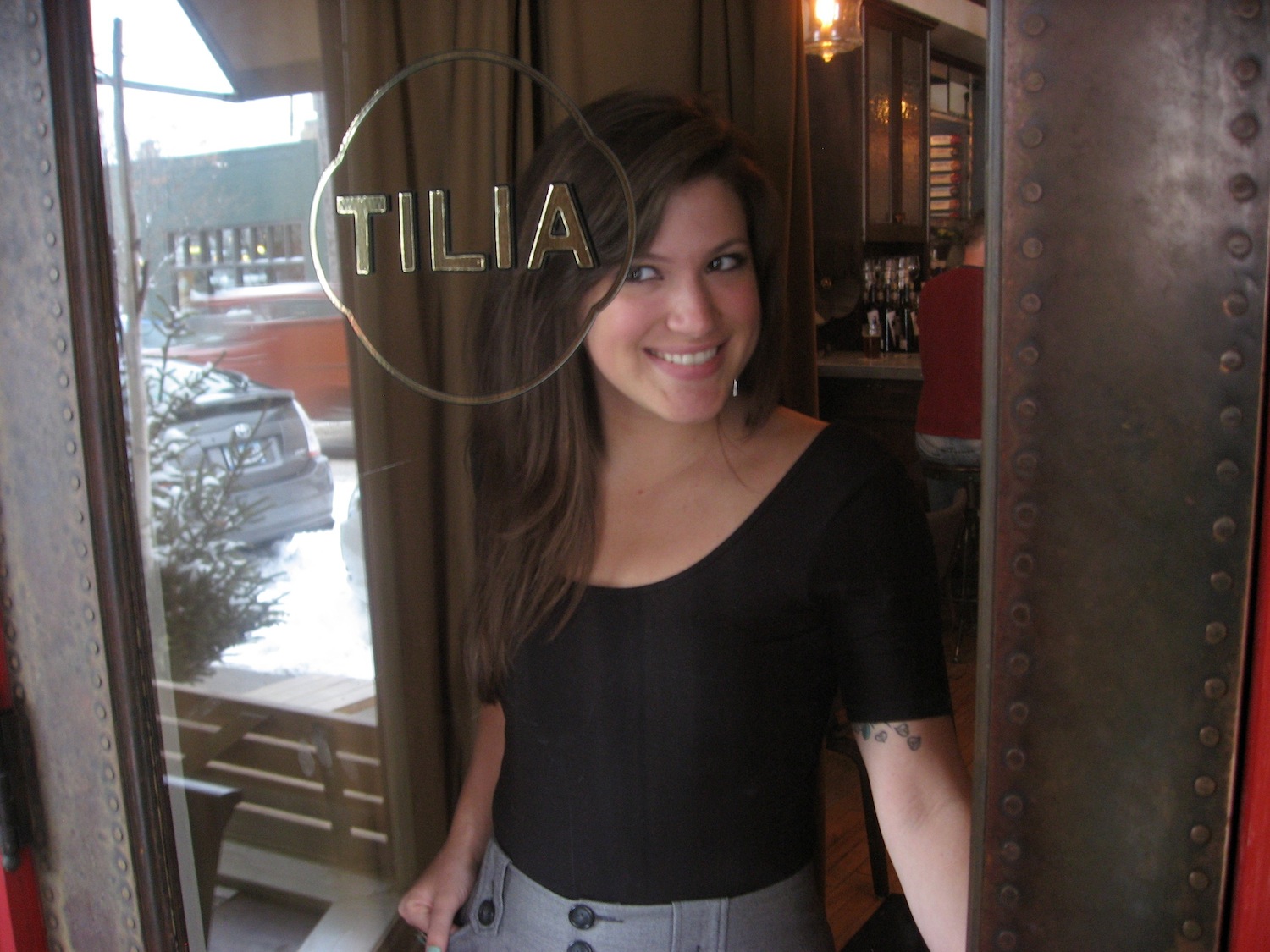 It's been a little less than two years since Tilia opened, and the no-reservations Linden Hills spot has already become a Minneapolis institution, with a jampacked waitlist every night of the week (and for brunch on the weekends). Front-of-house manager and general Tilia jack of all trades Tai Rosa Maldonado has been with the restaurant since before it opened its doors. We chatted with Tai about getting a table, the late-night scene, and memorable engagement and birthday stories (with a brief cameo by Tiilia's chef and co-owner Steven Brown).

So, you guys don't take any reservations here ever? Or what is the reservation policy here, in your words?
Tai: We do not take reservations at Tilia. One of the main reasons for that is, you look around and you see 14 tables. So if we were to take reservations, and lets say we can only take seven per night, we would book out say two months in advance very quickly. There are certain times when we do appreciate a head's up. Let's say Joan and her 70-year-old mother are coming here for her mother's birthday, and she can't be underneath a speaker that's very loud, she can't wait for very long because she's in a wheelchair. We love knowing those things because we need to be able to accommodate people.

Are there any circumstances under which you would give anyone a reservation?
Tai: [Winks] No. You can ad lib that wink in there. There have been exceptions made in the past, but what we do instead of making reservations, especially for large parties, we do allow for people to reserve out half or the entire restaurant.

It's 8 p.m. on a Friday night. What's the typical wait for a party of 2?
Tai: It could be anywhere from 30 minutes to an hour and 30 minutes. It always depends on the expectations of that group. We do have the kitchen counter that is very fun, its very interactive, and, oddly enough, it's one of the last places that will fill up in the restaurant -- because you get a group of two and it might be date night and they want to have that intimate dining room spot. But sitting up at the kitchen counter, and being able to see what's going on in the kitchen, and being able to feel the warmth of the kitchen is extremely intimate, and it's very fun.

When would that 2 ½ hour wait happen?
Tai: You know, this is something that doesn't happen every weekend, but let's say on a Friday or Saturday night, there are groups of people who come into Tilia, and they wait 45 minutes, but they want to have a three-hour long dinner. That's not a conversation we have with the guest, but if they want to sit and have coffee, and it's a group of girlfriends that haven't seen each other in a long time, we will never ask those people to leave. We will never stop filling their coffee or stop filling their water, they are entitled to their spots, but it makes the rest of the people waiting for a tables have to wait even longer. There are a lot of people who understand that -- maybe they've worked in a restaurant before, or maybe they can just catch the glares of other people in the dining room. But when that happens once or twice in an evening, it can really push back the rest of those time slots.

Has anyone ever tried to bribe you to make their wait a little shorter?
Tai: Well, yes, there have been some very funny occurrences, where people will say they know that their table is coming up and they can see that the guests who are enjoying the table before them are just taking their sweet time, they make jokes about going and buying that table dessert, or something like that. But whenever people try and say some sort of arbitrary bribe in turn for a table, I like to make jokes about that.

How do you handle that?
Tai: I say well, you know I get to enjoy this food all the time, so you could maybe bribe that table into buying their dinner if you want their table so bad. People laugh about it—it's not something that really going to kill anyone's day. People know we don't take reservations.

What is the late night scene here like?
Well, because we are one of the restaurants that's open late and still serving food all the way up until about 12:45, we do notice that a lot of industry friends will come in, nearby restaurants like Broders' or In Season or Café; Maude, next door at Harriet Brasserie. Those people get off work and they're hungry and they want a decent meal too. Jamie Malone, who was recently nominated for a James Beard award, she comes in on a regular basis after she's done with a shift, and that's really awesome because at the end of a long day, you just want to finish strong. And having likeminded people come in late night is really great.

What's your favorite thing to eat here?
Tai: It's tough to say, I have favorites in every part of the menu. All of our pasta is hand rolled here in house every morning, and it really is something special. Right now, we have an amazing bison New York strip, and between the pastas and the bison those are probably my favorite entrees at the moment, but I have learned in my two years of knowing Steven, people travel far and wide for that man's soup, and right now it is all about butternut squash soup. Seriously. Other than that, I know I already mentioned the pork belly. And I am so very much anything that comes from a pig lover, and our pork belly is probably my favorite small plate right now.

Where are you eating when you're not eating here?
Tai: I do have a couple of standby faves, for sure. I suppose because I work late, I'm big on breakfast, so Bryant Lake Bowl is one of my go-to breakfasts in the city. I guess I don't want to name all Kim Bartmann restaurants, but I do like her restaurants very much. Barbette also treats me very well every morning for breakfast. The North Loop is one of my favorite places. There's the Bachelor Farmer and Marvel Bar. Absolutely love Borough and Parlour right now, I'm recommending that to anyone and everyone, and then there're so many other little places around there like Black Sheep, and B'Wiched, and Bar la Grassa, that are all so great. And then, after having fun for dinner, stop at Club Jäger on the way home and dance your pants off. It's a really, really fun, great scene. I love the North Loop area. A little closer to home for me in Uptown, and somewhere I like to go alone a lot is La Belle Vie. Not to name every restaurant in the city!

Have you ever gotten any outlandish requests here? Or maybe just a memorable birthday or engagement?
Tai: Oh there was one very memorable evening here at Tilia. There was a gentleman who was proposing to his girlfriend. They had their first date at Tilia, and he had emailed info@tiliampls.com, and he said I want to sit at the same table that we did at our first date, and I want to propose to my girlfriend. So Steven, of course, is going to make that a special occasion, and we're going to pull it through with perfect execution. So, he had a meeting with the gentleman, and he brought in the ring and he wanted it put in the dessert. And this just so happened to be an evening when all the servers on the floor were females, and we're all so excited for this to finally happen. And we did end up getting to seat him at that table where they had their first date, and they both looked fabulous, and when it was time for dessert, Steven was getting everything ready to go, and the whole kitchen's excited, the whole server staff was excited, and by that time maybe some of the other tables in the rest knew what was about to happen. And there was a round of applause throughout the whole restaurant, and I do believe she said yes.

Tai: [To Steven] I was just telling the story about the gentleman who proposed to his girlfriend, they had had their first date here and he emailed you and wanted to sit at the same table. Steven: Yeah, that was sweet. Tai: That was one of my favorites. I think I cried. Steven: A lot of people were happy, and a couple people were unhappy, if you recall, too.

Any other memorable moments?
Steven: Well, last night we had these people from Hayward, Wisconsin, and the woman calls me up and says we're so excited to come, we can't believe it, and I said fantastic. And they said their daughter lives in town and it's her birthday. And we arrange with them for the mom to bring a birthday cake from Wisconsin—the dad sneaks it in—and then Evan, the server, tells them all about all the desserts, and then we bring out this cake which was, my God, it was like the coat of many colors, there were so many different colors of frosting, and then it had confetti inside of it. I was joking their poop is going to be blue! And the daughter just starts to cry. Tai: And again, there's the whole restaurant applause. Steven: And everyone sings happy birthday, and again, its not like you can not know what's going on. Yeah, that was pretty good. Everybody sang happy birthday. She cried. I was like, I think there's two people at that table who love you, and she was like, "I know."