Jack Riebel on One Year at Butcher & the Boar

Share All sharing options for: Jack Riebel on One Year at Butcher & the Boar

Welcome to One Year In, a feature in which Eater sits down for a chat with the chefs and owners of restaurants celebrating their one year anniversary. 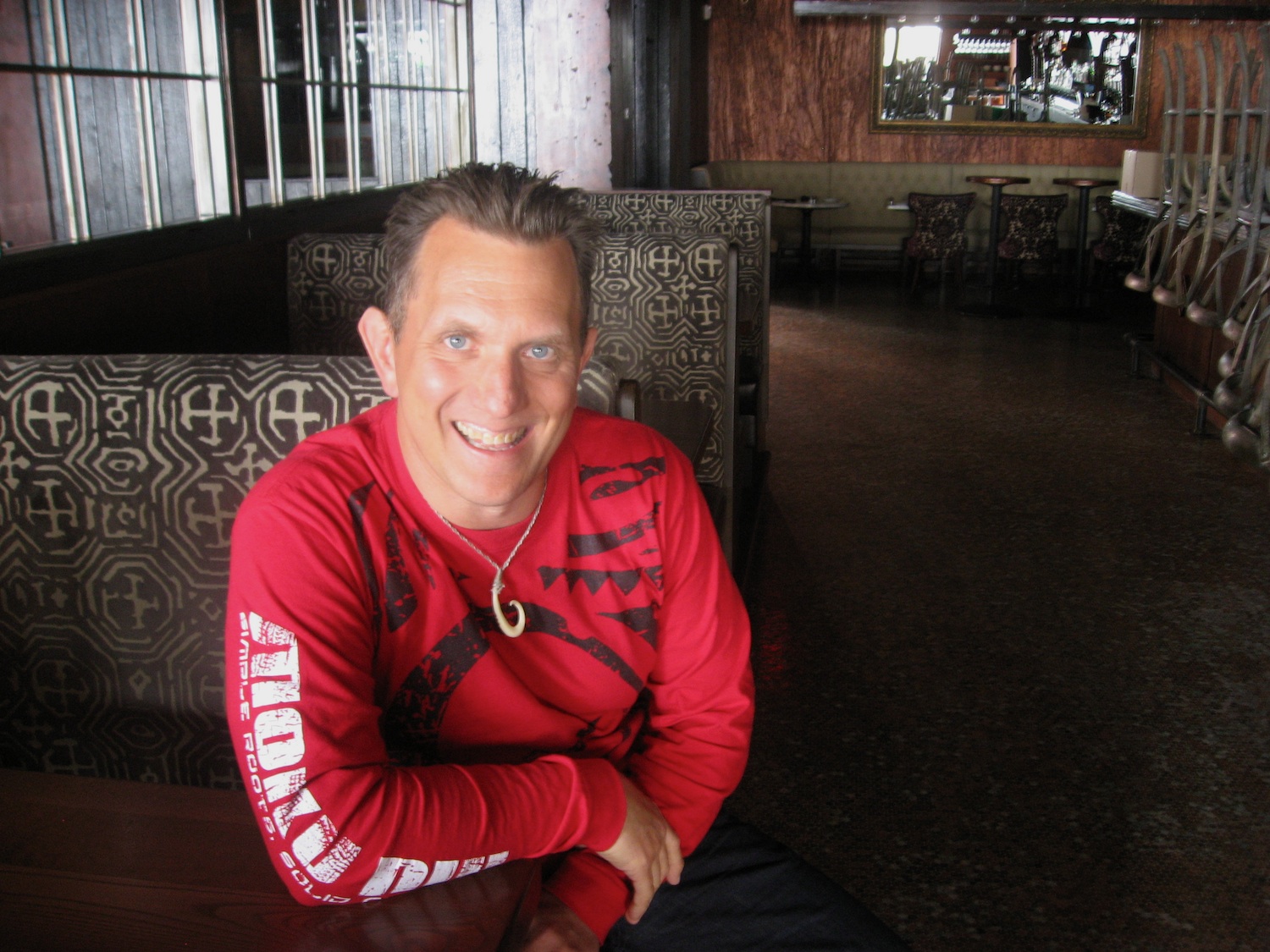 After years of cooking at several top dining spots around town (including La Belle Vie and the Dakota), Jack Reibel signed on as a consultant to Butcher & the Boar in September 2011. By the time the restaurant opened six months later, he was the full-time chef and also a co-owner, and the rest is meat and bourbon-soaked history. In just one year, the always-packed spot has become known for its sausages and its extensive beer menu, while also racking up critical nods like the Star Tribune's Best Restaurant of 2012 and, most recently, a spot as a James Beard semifinalist for Best New Restaurant.

In true Butcher & the Boar fashion, they are celebrating their one-year anniversary this Sunday with an all-day blow-out beer bash from 2 - 10 p.m. in the dining room and winter patio, no reservations needed. Here's chef and co-owner Jack Riebel on one year of Butcher & the Boar, menu hits and misses, Guy Fieri and Buffalo Wild Wings, and plans for expansion.

What do you think brings people to Butcher & the Boar?
Jack Riebel: I think a multitude of things. I think obviously, we've had amazing press, so I think people just want to come because it's new. But I've lived in the Midwest my whole life, and basically we're giving people meat and potatoes with a twist. I think it's comfortable enough. I've cooked fine dining for 25 years, I've been the chef at La Belle Vie, I was executive sous chef at Goodfellas, I cooked at Dakota. So my dad has carte blanche, he could eat at any restaurant he wants with no check any time. I'd give him a gift certificate every year, get him a hotel or whatever, he'd never come. He's been to Butcher and the Boar three times in a year, because he can navigate this. He doesn't want to sit down for five courses at La Belle Vie, he just doesn't. So it's interesting because I think we've captured this familiarity, but we've also put enough of a spin on it that it intrigues people.

What was a really big hit and what was more of a miss on the menu over the first year?
Jack: The big miss for me was I love the pickled shrimp cocktail. But I'm going to bring that back in the summertime, outside. But we just didn't sell it, and I thought it was great. That was probably the biggest disappointment, because I think all of us collectively, the owners included, loved that dish, and it just didn't work. Some things we haven't changed, which are a little outside of my diagram. Like a hit being the cheddar with the broccoli. You knew the cheddarwurst [the Berkshire Pork and Cheddar Sausage]– when Peter made it, I was just like, this is it. This is the sausage. The challenging one, to me, was the footlong. We were afraid we were going to be known as the footlong hot dog place. And the footlong is amazing, but it's not our top-seller by any means.

What's the top seller?
Jack: Probably the beef long rib. And, you know, I started out with all my meats being meats for two, because I'm price-conscious. I started out with meats for two because they were all in the thirty dollar range. I wanted people to come in and say okay, I can get a rib, share two sides, have a cool fish item, and not spend a ton of money. But people started ordering their own, so finally I just eliminated the "for two" on the menu and now it's just the meat section. But it's amazing to me – our pork chop is like 27 ounces, and people eat the whole thing. That's good for some; it's not good for foodies. Our food is challenging enough for foodies, but I look at what Borough is doing or Piccolo – which I love, I think Flicker's a genius – that's a different model. So it's just interesting to see because while I've always cooked like that, and now I'm doing something entirely different, and it's just this raging success.

What were some of the biggest challenges over the first year?
Jack: For us, the biggest challenge was how busy we were. Obviously, staffing is always an issue. I feel like in my lifetime, every time I take a vacation, I lose at least one cook, and I don't know why that is, it's just the way that it works. We had an entire staff turnover probably in the first six months, with the exception of two, and I think that's been one of our biggest challenges. And Dara said it early on, too, that we weren't ready for the tsunami of business. It took us a little while to get our feet on the ground.

So how did you adjust to the volume of business here? How do you get your feet on the ground?
Jack: I think you just have to do it. We work in a very peculiar industry. Because to the spectator, they're going to think, chefs are highly educated, super smart, they do all these interesting things. But at the end of the day, what we do is a very blue-collar job. At the end of the day, what it comes down to is an exercise in repetition. These guys are cooking the same plate of food forty times a night, every night, for a year. So to get your feet on the ground, you just have to do it. And I think the testament to a restaurant being successful is how well they do that. I think it's unfair to judge a restaurant too early. I think our biggest challenge now is how do we stay relevant, how do we move forward, how do we continue what we're doing and keep people interested along the way. And maybe it's feeding them a lot of bourbon, I don't know.

Your first year, you guys had a lot of success – the Star Tribune Restaurant of the Year in 2012, a James Beard semifinalist for Best New Restaurant. Did you see any of that coming?
Jack: First of all, it always comes from hard work. I think your success is measured on consistency, and I think that you can never use those nods as a measuring stick. Like, I don't say to these guys, here's the motivation, today we're going to open up and we're going to be best restaurant in the first year or best new restaurant or any of these things. I think what you do is you open up and you say, we're going to be the best we can be every night. We have a tried and true food product, something I believe in, something I stand by. And then you push as hard as you can to execute that at the highest level every night.

And to me, success is when your business operates and makes money. I think a lot of times, we rely too much on the media, we sensationalize what we do. I don't really care for Guy Fieri, but I love what he does in the sense that I like the places that he goes. Nobody knows the owner of Buffalo Wild Wings, but Buffalo Wild Wings is wildly successful, no pun intended. Now, I don't go there, I don't have to like it, but as a business model, they're doing awesome. So to me, the first thing is you create this awesome food, execute it, do it well, but you also have to make money. And I think so many of us get lost in being in the world of being super creative and doing these great things and we want awards, but then we lose focus on what it really means to operate a successful restaurant and make money.

Do you have any goals for the next year?
Jack: There's a couple things we're really working on. One is the beer garden cooking element. This year, we're putting bathrooms outside and now we're trying to establish a cooking element. The plan all along was a trailer, but now it looks like that might change. We want to be able to cook outside – we want the outside to be its own self-contained operating kitchen, operating bathroom, operating events center. Basically a kegger with sausages.

The other part of what we're doing is we're trying to launch our own brand of sausages. It's being branded and marketed right now, but we've already done all the R&D work, and Lunds & Byerly's is interested. We're also going to be USDA and FDA approved, so we could also send our stuff nation-wide. And we want that to be something that you can't get in the restaurant. So I want the beer garden to be this experience where you can come out there, and maybe it's a $10 sausage basket with fries, and it's in a bun, and in here, it's still very fork and knife, full service. Out there, it's way more casual, and maybe looking at taking that casual concept and expanding that. Like maybe we want to have a sausage and beer stand somewhere, or maybe selling our sausages to different tasting rooms in town. But we're really focusing right now, coming into the springtime, on how do we make our beer garden more exciting this year.

Do you have any plans for another restaurant?
Jack: Actually, right now, I'm looking at consulting on a rebuild – a bar and kitchen concept. So it will be a really cool bar with great food, more of a small plate. More of a bar with food in it, not a full-service restaurant. It's going to be in Loring Park. It's an exisiting restaurant that we're going to rebuild and reconcept and I'm going to consult on that. And, like I said, my focus is totally on the beer garden. I look at the beer garden as an opportunity to open up a second restaurant. And then, I think in the next year, I'd like to do something else here, but who knows what's going to come next.

· All Coverage of Butcher & the Boar [Eater MPLS]

Little Tijuana Is Back On Eat Street, Chicago’s Very Own Is Slinging Hoagies at Lyn-Lake, and More Openings