Last week, we asked readers to name the one food truck dish they couldn't live without, and the tipline and comments were flooded with responses. The suggestions ran the gamut from arepas to donuts to several takes on the word "burrito" (indurrito, currito).

Here now are 10 of Minneapolis's Must-Have Food Truck Dishes, as voted by readers, presented in random order. The trucks can be usually be found in downtown Minneapolis, downtown St. Paul, the weekend farmers' markets, and most taprooms. You can check the trucks' schedule on their website (or Facebook/Twitter) for exact locations and menu on a given day.

Is your favorite dish still missing? Shout it in the comments.

1) Hola Arepa: This truck got multiple shout-outs: "If I had to choose only one thing from a food truck, I'd have to get something you I can't just get anywhere. So mine would be the Thai arepa from Hola Arepa. So good." The pulled pork and sweet potato arepa also got a nod in the comments. The arepas—Venezuelan cornmeal griddle cake sandwiches—run $6.50 - $7; they are all gluten-free and vegetarian dishes can be made vegan.

2) Gastrotruck: A commenter put in their vote for the lamb burger from Gastrotruck, made with local farm Shepherd's Song 100% grass-fed lamb and topped with a feta-olive tapenade and mixed greens ($9).

3) Hot Indian: New this year, Hot Indian already has a devoted following, if the comments are any indication. One commenter recommends the paneer indurrito ("Could eat it every day") and another says you have to try the frites ("The frites from Hot Indian is where it's at!! Crispy flavor explosion!"). There's also an indurrito flight, featuring all four indurritos (Indian burritos, if you haven't already figured that out) in miniature version, for $14.

4) Vellee Deli: A commenter writes: "You cant go wrong with Vellee Deli's Banh Mi or Currito. Two Kicks please! Awesome service and super FAST turn around." If you've never visited Vellee Deli, let's take a second to decipher that rec: currito means curry plus burrito, two kicks means what scale of hotness (out of one to three kicks). Now you're all set to order like a pro.

5) Get Sauced: A tipster writes in: "Although the slow roasted pork and queso fresco distinguish these tacos it's their unique Oaxacan salsa that makes this food truck memorable. Their original salsa is rich, a little smokey, and totally unlike anything else being offered in Minneapolis." There you have it. Get some.

6) Smack Shack: The Smack Shack's—what else?—lobster roll was an early pick: "Chunks of lobster on that buttery, herby toast. I can't stop thinking about it." Now that they've got a brick n'mortar in the North Loop, the truck is only on the streets occasionally, making it the unicorn of food trucks. If you get a rare sighting, you'd better make good on it—you might not get the chance again. 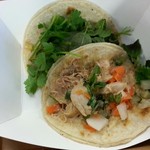 7) World Street Kitchen: A reader votes for WSK's chicken tacos, with just one wish: "If only they would make it an every day item." They're not on the menu at the WSK brick n' mortar, either, so you'll have to catch them at the truck. Or maybe chef Sameh Wadi is listening, and will make everyday chicken taco dreams come true.

8) The Cave Café:The Cave Café describes itself as Afro-Italiano fusion, reflecting the Eritrean roots of chef Tewodros Negash (Chef Teddy). That mixed influence is reflected in the eclectic menu, which includes everything from several kinds of tibsie (an Ethiopian grilled meat main dish) to curry dishes to wraps. A reader votes for the steak wrap ($7), steak with tomato, onion, green pepper, cheddar, and choice of mayo or pesto.

9) Chef Shack: If you see a big red truck on the street, here's hoping it's the Chef Shack donut truck (they have two, one donut-equipped and one that's not donut-equipped). Those donuts are a thing of cinnamon-dusted beauty. Wash 'em down with an Arnie Palmer, suggests a reader.

10) Foxy Falafel: "On Saturdays, I am always craving the beet falafel of Foxy Falafel," writes a reader. Raw beets are ground up with the chickpea mix, shaped into balls, and then fried like normal falafel, adding a hint of beet flavor and a lot of beet color.