Looking for something to do this weekend? Here are five choice dining events going on around the Twin Cities:

1) Prevail Travail Block Party
When: Saturday, 2 to 8 p.m.
Where: Travail
What: The guys at Travail Kitchen and Amusements are celebrating the end of summer (and the beginning of their new building) with a party in the parking lot. They will be serving up pulled pork sandwiches, chicken, brats, corn, and more at ridiculously friendly prices ($2). They'll also be pouring Surly beer and will have live band karaoke. Find more information about the block party here. 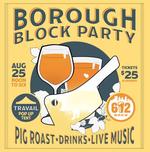 2) Borough Block Party
When: Sunday, noon to 6 p.m.
Where: Borough
What: On Sunday it is Borough's turn to throw a block party. There will be beer from 612 Brew, a pig roast, a pop up tent from Travail, live music, and more. Tickets ($25 in advance and $30 at the door) will get you entrance to the block party plus a plate of food and a drink. Ticket and other event information can be found here. 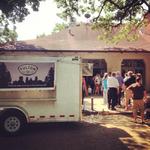 3) Sea Salt Patio Party
When: Friday and Saturday, 11 a.m. to 9 p.m.
Where: Sea Salt
What: Stop by Sea Salt for a Fulton patio party. Fulton will have a beer trailer parked near the eatery serving up some of their brews (Lonely Blonde, Ringer, Sweet Child of Vine, and the last of the Fulton Mild) to compliment Sea Salt's seafood offerings. Live music in the nearby Minnehaha pavilion starts at 7 p.m. (Friday only). Find more information here.

4) Alary's Craft Beer Extravaganza
When: Saturday, 5 to 8 p.m.
Where: Alary's Bar
What: Alary's is teaming up with the folks behind the St. Paul Summer Beer Fest to put on a craft beer sampling on their back patio. The event will feature 15 breweries from Minnesota and beyond. Alary's will also have burgers and brats straight from the grill available along with live music. More information about the beer festival can be found here.

Also of Note: Red Stag Supperclub is throwing an after party for the X Art Tattoo Fest with Sailor Jerry drink specials and more (Friday 10 p.m). Summit Brewing is taking over the taps at JJ's Coffee and Wine Bar in Uptown (Friday 6 p.m.). Woodland Hill Winery is holding their 5th annual German Fest with food, dancing, and beer from Lucid (Saturday, 2 to 7 p.m.). Steel Toe Brewing celebrates their 2-year anniversary with $2 pints in the taproom along with House of Hunger food truck (Friday, 3 p.m.). Meritage continues their weekly Tour de France dinner featuring food and wine from the Provence and Cote d'Azur region (Friday).