J.D. Fratzke on The Strip Club's Daily Meat on a Stick

Share All sharing options for: J.D. Fratzke on The Strip Club's Daily Meat on a Stick

In honor of The Five Days of Meat 2014 and today's Meat on a Stick Power Hour— starting RIGHT NOW— we're highlighting some of the dishes from St. Paul restaurant The Strip Club's ever-changing meat-on-a-stick small plate. But first, an introduction. 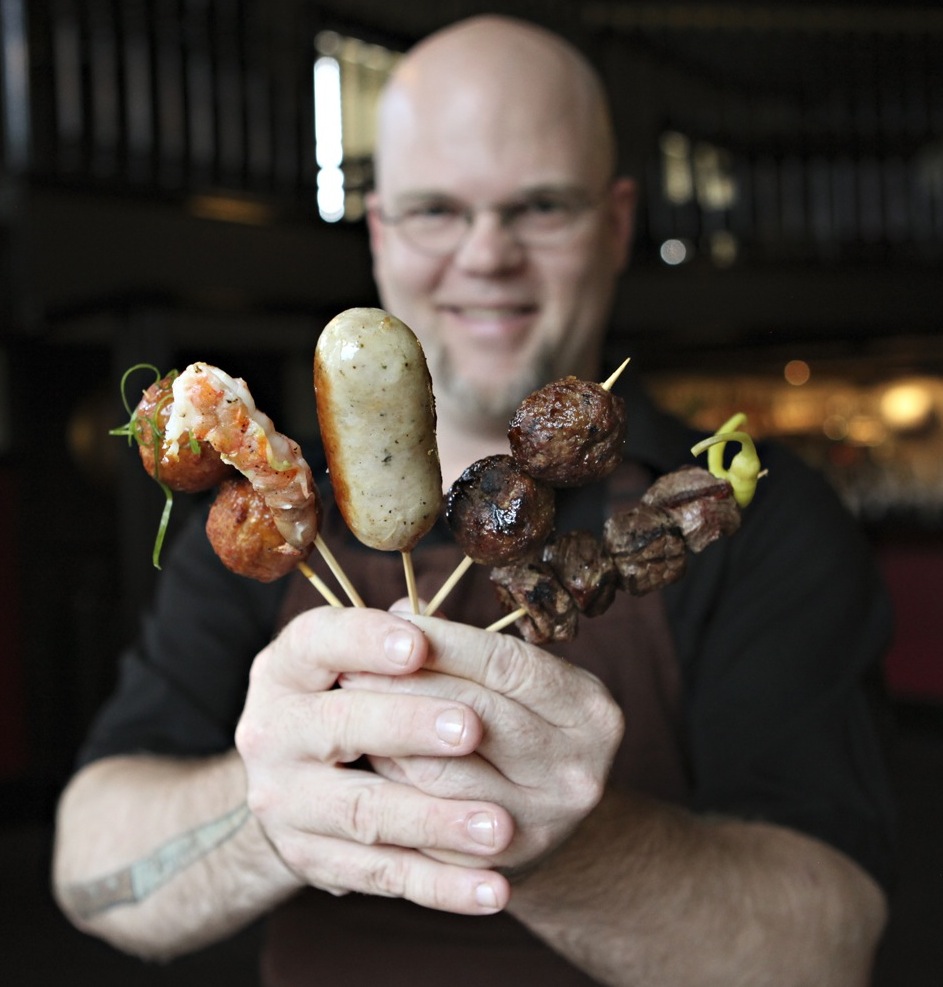 When he came up with the idea for a daily meat-on-a-stick special almost seven years ago, The Strip Club Meat & Fish's chef and co-owner J.D. Fratzke was looking for a way to use up meat and fish scrap in a distinctly Minnesotan way. "What's more Minnesotan than meat on a stick?" Fratzke explains. "It's just such a distinctively Minnesotan approach to food. I thought it would be fun, like an inside joke with anyone who has lived here their whole life."

Meat on a stick has been on the menu ever since, with the actual dish changing almost every other day and never repeating. "We try to do a new one every time. It's a way for us to challenge things," Fratzke says, calling the dish a "huge laboratory" for new sauces, plating ideas, and more.

That's not to say that some meat on a stick dishes don't stick (that's right) around; for example, the fried chicken mousse plate on The Strip Club's current menu (coming up here at the end of the hour) started out as a meat on a stick special, as have some pork belly and some fish small plates.

But back to the dish's Minnesotan roots. It's so Minnesotan, in fact, that when the ticket rings up in the kitchen, the cooks don't call out "meat on a stick" (the name of the dish on the menu), they call out "State Fair," in honor of the yearly Minnesotan event that serves up all manner of food-on-a-stick. Two years ago, The Strip Club actually did their own version of State Fair favorite, the Pronto Pup, dipping grass-fed mini-hot-dogs into cornmeal pancake batter, frying them, and serving them with house-made bacon-ketchup.

This year, Fratzke has some "stick-related celebration" ideas up his sleeve come Fair time, likely involving house-made sausages and something in the corn dog family. "I'm a sucker for a corn dog," Fratzke says. "I almost always get a corn dog when I go to the state fair. State fair only."
· All Meat on a Stick Power Hour [Eater MPLS]
· All Coverage of The Strip Club Meat & Fish [Eater MPLS]
· All Coverage of The Five Days of Meat 2014 [Eater MPLS]
[Photo: Katie Cannon/EAMPLS]