Boyd Freeman on 37 Years at Murray's

Share All sharing options for: Boyd Freeman on 37 Years at Murray's

Welcome to Lifers, a feature in which Eater interviews the men and women who have worked in the restaurant and bar industry for the better part of their lives, sharing their stories and more. 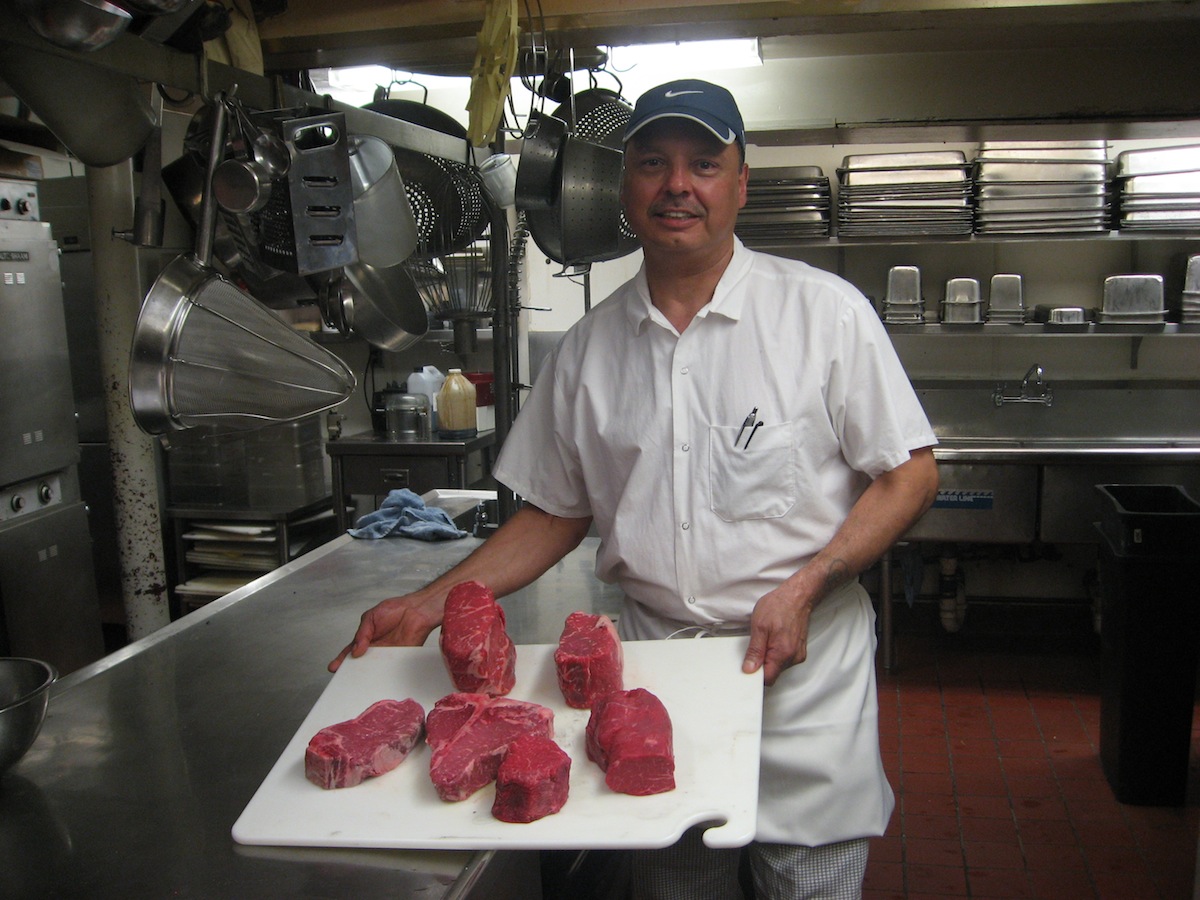 When Boyd Freeman started working at Murray's in 1977, he was just seventeen. Now fifty-five, Freeman has never worked anywhere else (and neither has his wife, who has been a server at Murray's for 43 years). He took over as the restaurant's in-house butcher—or, as he prefers to call it, "meat-cutter"—in the late 80s, cutting the steaks, portioning the fish, grinding the burgers, and much more. Freeman—who also serves as one of Murray's sous chefs—took a few minutes to chat with us at 2 p.m. on a Tuesday, between lunch service and dinner prep. We talked about how he met his wife, the way tastes in meat have changed over the years, the secrets behind the Silver Butter Knife Steak, and Murray's off-menu Golden Butter Knife Steak.

When did you start here? 1977. I did everything, I did the dishes, I did anything they wanted. I was just a young kid, walking in the door. My best friend asked me if I would mind helping out—being the cook's help, just helping around the kitchen, doing anything they needed to be done—and I picked it up. I started here when I was seventeen. I met my wife here when I was twenty, and then I started going out with her when I was twenty and married her at twenty-three. It was our thirty-second anniversary this year, and we still work together.

What caught your eye about her? You know, that's funny. I was working days for a couple years and then when I was nineteen or twenty I started working nights with my buddy. And she walked by and I said to him, I'm going to make her my wife—just teasingly, being cocky because I was a young kid. And then we just got to know each other and one thing led to another. And we got married when I was 23. I'm 55 now. She's been here 43 years. Murray's is family. They're not like family, they are family to us. They've treated us so well through our years. I grew up here, for sure.

How did you learn how to butcher? I was working behind the butcher, Arnie—he retired back in the late 80s—so then I watched everything. Everything came in in big sides back then, we used to saw, and he would show me how to cut everything, and that's how I learned. He retired, and I kind of fell into filling in for him. Well, they liked what I was doing because I was doing it like Arnie, so I just kept on doing it and they didn't need to hire another meat-cutter. I work the line, I manage the place if the need me to, I do pretty much everything. I've been here for 37 years now.

What is the process of butchering the Silver Butter Knife Steak? We bring our meat in after being aged 30 days, and every piece of meat that comes through the door I inspect or the chef does. And, of course, if there's some concern, I'll show him that and he'll get right on the horn and send it back. We look at consistency in size—the eye size, the marbling, make sure the age on it. It comes in strips, so I precision cut them and trim them up to our specs.

They come in pretty much steak-ready, but still I do a little extra trim. We don't want to leave too much extra fat on the steak. You get what you pay for here. We used to leave a big fat gristle on the side back when I first started here, but then as the years went on, people like a leaner cut, so I cut off all the chain—the fat strap—so it's pretty much just a little layer of fat. And then I season it with our own seasoning, and we have a special broiler we cook it in. That's why it's such a signature item.

How have tastes in meat changed while you've been here? Different aging processes, different cuts. When I first started here, everything was dry-aged at the time. Dry-aging is a process where they put it under bacterial lights and fans and actually dry it out and rot the outside of the meat, and then you have to cut everything off. It's a great flavorful steak, but it has a shorter shelf life, so you really have to get it in and out the door. So it's good for a specialty, but if you don't sell the thing in four days at the max, it's tossed. And you're paying so much more a pound for it because once you get it in, you have to cut off all the outside, and that kills the costs and then you have to jack it up and it hurts the prices on the menu. Now, the meat is locker-aged thirty days in a Cryovac, where it still breaks the enzymes down, does the same basic thing, makes it tender and still full of flavor, but there's no waste on the outside. So that's the way we've been going. That's one change I've been through.

We used to cut down the full loins when I first started, used the bandsaw and all that. Now we just get them processed, and I cut them from there. The tenderloin comes in a Cryovac, pretty much clean, ready to go. Strip loin the same way.

The Silver Butter Knife did used to have a lot more fat. That's back thirty years, thirty-five years. But as people get more health-conscious, there's less fat. And it looks better, too. If you look at our sign out there, you can tell, that's an old picture of how the fat trim looks.

Are there chops or cuts that were popular when you started that aren't on the menu now? Our signature items have always been on the menu: our filets, our New Yorks, our chateaubriands, our Silver Butter Knifes. One steak that we don't have on there that isn't as popular now was the Golden Butter Knife Steak, a four pound porterhouse. They carve it table-side for three. And we get special requests for that, so then we'll bring in some of those and we'll still serve it, but that used to be one of our main steaks. But then people say, ah, four pounds, it's too much. We don't have it on the menu, but we do have a Silver Butter Knife for three, so I'll cut a bigger one at 42 ounces, and they'll cut that table-side for three.

Do you have a favorite cut? I do like a good sirloin or New York or Silver Butter Knife, or even porterhouse. I like the flavor of the sirloin, it's a little firmer, the marble melts in your mouth, it's very delicious. Tenderloin to me, it's very, very delicious, but it doesn't have as much flavor as a New York strip.

What's your favorite thing about working here? Just working with all the family and the people, they're so good to work for. I grew up and have seen three generations grow up here and start running the place. When I first started here, I had long hair and Mrs. Murray kept looking at me and shaking her head. So one day I cut all my hair off and I came walking in, and I said, "Mrs. Murray, this is for you." And she just took me under her wing then, treating me like I was one of the family.

And Pat Murray, of course, he took over after she passed, and he was a father figure to me. He was such a great man. He just recently passed, a little over a year ago. And Tim, watching Tim grow up, going to school. I've seen all the kids working in here, and now they're the owners and bosses. I have the most respect for their family. They've treated me and my wife very well throughout the years. And that's why I wouldn't even think about leaving. That's how much it means to me. I'm a lifer.

What is the most difficult thing about working here? Well, when it gets a little hot and humid sometimes, I'd say the heat in the kitchen. But sometimes you do run into a couple people where you have to train them and it doesn't work out, and you feel bad. The hardest thing I guess I could say is trying to help somebody out and they just don't get it. Other than that, I've really enjoyed working here.

How do you spend your time off? I'm off on the weekends. A lot of housework. A lot of my honeydo list. Or watch football.

How much longer do you plan to work here? As long as my body lets me. I've had a few surgeries through my years, but that's the life of lifting meat. I plan to retire here.

I've been very fortunate and very happy to be part of this family. Everything I've done, hopefully they've been proud of. I'm sure they always say they are. I've really been just super, super blessed, me and my wife both. First of all, to be here, and then to meet her. A lot of people don't know how you do it, when you work with your wife for so many years. But she does come a little bit later, and I leave, so we kind of float by each other. I love it here.
· All Coverage of Murray's [Eater MPLS]
· All Previous Lifers [Eater MPLS]
· All Coverage of The Five Days of Meat [Eater MPLS]